I first met Luca Tarantino in Lecce in southern Italy when he was playing with Canzoniere Grecanico Salentino.

Luca is a masterful player of the Baroque guitar and the Theorbo. He’s also very passionate about music and whenever we’ve met over the years, I’ve always come away with a treasure trove of music to delve into on his recommendation.
I contacted Luca a couple of years ago when the concept for the new album was beginning to take shape. I asked him if he could make me a playlist or a kind of dummy’s guide to Baroque music.

A few months before, we’d all been invited to our mutual friend Mauro Durante’s wedding and I remembered during the service, he’d played a Ciaccona by Kapsberger on Theorbo and a wonderful improvisation with the organist Guido Morini. I was haunted by their performance and I wanted to hear more of this kind of music !
Hearing Luca play with Guido was a revelation, ashamed as I am to admit it, I didn’t know the Baroque repertoire at all and I’m still only scratching at the surface of this extraordinary moment in the history of music.

The song “Anima” on the new album is very much influenced by many of the Kapsberger pieces Luca sent me to listen to and when I came to record, I knew I had to have him play alongside me.   On the album, Luca plays a wonderful baroque guitar line in the choruses of “Judith” that drifts in and out of the voice and on the song “Anima”, you can hear him play a bass part on Theorbo as well as a lead and rhythm part on baroque guitar.

So many wonderful musicians have contributed to the making of I Dreamed An Island and I’m very happy to be able to use the blog as a platform for me to introduce and talk about all of the collaborations that feature on the album. Thank you Luca!

My drawing of Luca Tarantino: 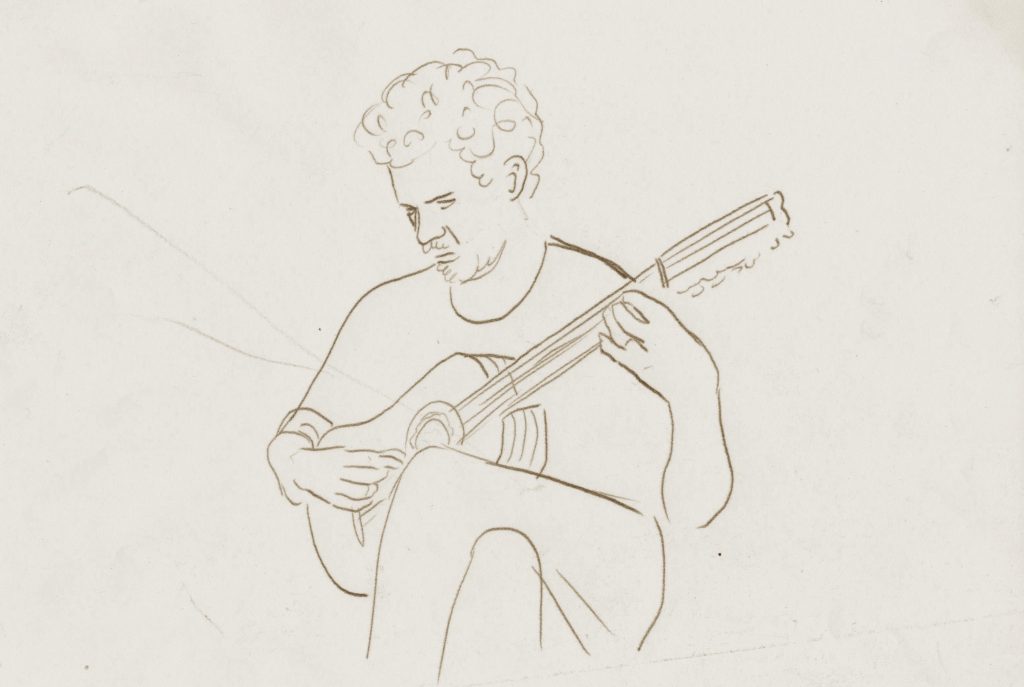