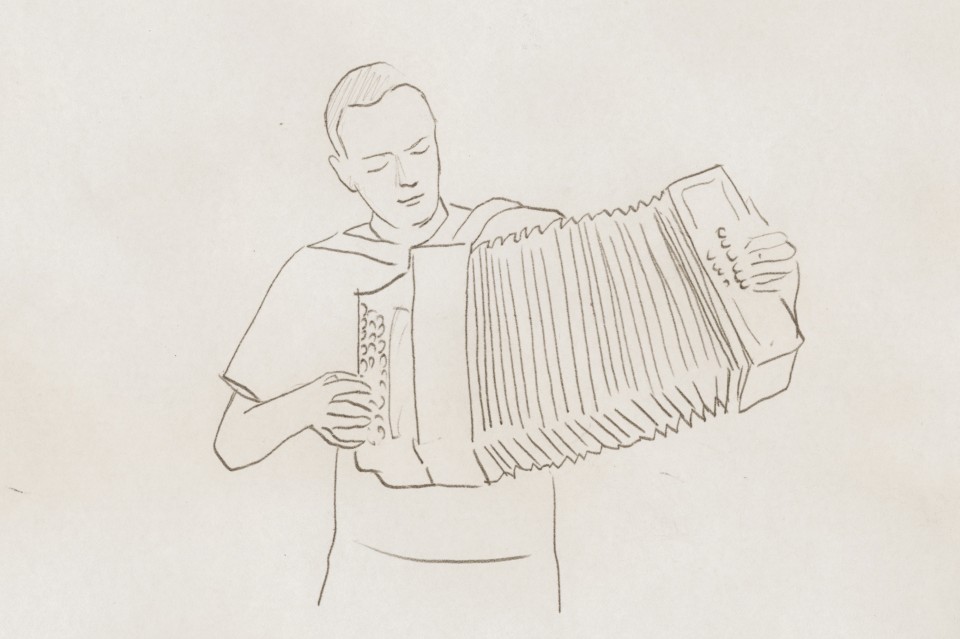 I met Massimiliano who plays organetto in the band Canzoniere Grecanico Salentino through Mauro Durante.
We’ve played together a few times in concert when our paths have crossed on tour and I’ve had the chance to hear and how good Massimiliano is.
When writing for the new album, I knew that there were a few songs that needed a particularly southern Italian feel and colour to them. As much as I can, I often try to cobble sounds out of the different instruments that I have but on this album, I needed true players and masters of their instruments. I wrote a song called ‘I Need A Brother’ that for the demo of the song, I’d played a harmonium part imitating an accordion. I had no doubt that Massimiliano would be perfect for the part and sure enough on the day of recording in Lecce in Mauro and his father Daniele Durante’s studio, he roses to the challenge with consumate ease.
The thing I love about Massimiliano’s playing is his rhythmic feel, he has the spirit and sound of all those wonderful traditional Pugliese songs and rhythms in his veins and his placement and swing is a joy to listen to.

Massimiliano is passionate about traditional music and is also a part time musicologist. He has made countless recordings and films of the last generation of old people alive today, still singing and playing the traditional songs in the area around Brindisi to the north of Lecce. Every time I see Massimiliano, I ask him about Tarantism or the origins of certain songs or rituals and he’s a veritable font of knowledge on the subject. He shared a wonderful anecdote about Tarantism, the trance rituals and songs that until the post war period were regularly used for healing. Massimiliano told me that when he asked an old person, who had previously been involved in the healing rituals associated with Tarantism, why it had slowly died out. He was told, ‘because now we have doctors and they have pills!’
But it goes without saying doctors can’t for all their knowledge and pills prescribe the medicine of music or the healing that comes from releasing the voice and the body to rhythm but luckily we have Canzoniere Grecanico Salentino for that!

There’s a song that Massimiliano plays that I love and that’s done me a lot of good as I must have listened to more than a hundred times, have a listen to it here and see if the treatment works on you too!