I went on a trip to southern Spain in November of last year and whilst researching Arabo-Andaluz songs on the net, I came across a recording of the Sephardic song Hixa Mia by Ana Alcaide and her group filmed in the beautiful Sinagoga del Transito in Toledo. At the beginning of the song, there’s an instrumental introduction during which you can hear a wonderful improvisation on the psaltery that I later found out was played by the American Bill Cooley.
I’ve been playing a very pale imitation of this instrument on my recordings for a few years now, using the sympathetic strings of a modern Indian Tampura although I’m sadly limited by my lack of technique as well as by the instrument itself. Hearing Bill’s playing and this gorgeous instrument was a revelation and I began hunting around to hear more of his playing, eventually finding him on another project of his called Puy de sons d’autrefois.

By the beginning of this year, I realised that I had written a few songs which I longed to hear played on the psaltery and so I invited Bill to come over for a couple of days and record on the new album. 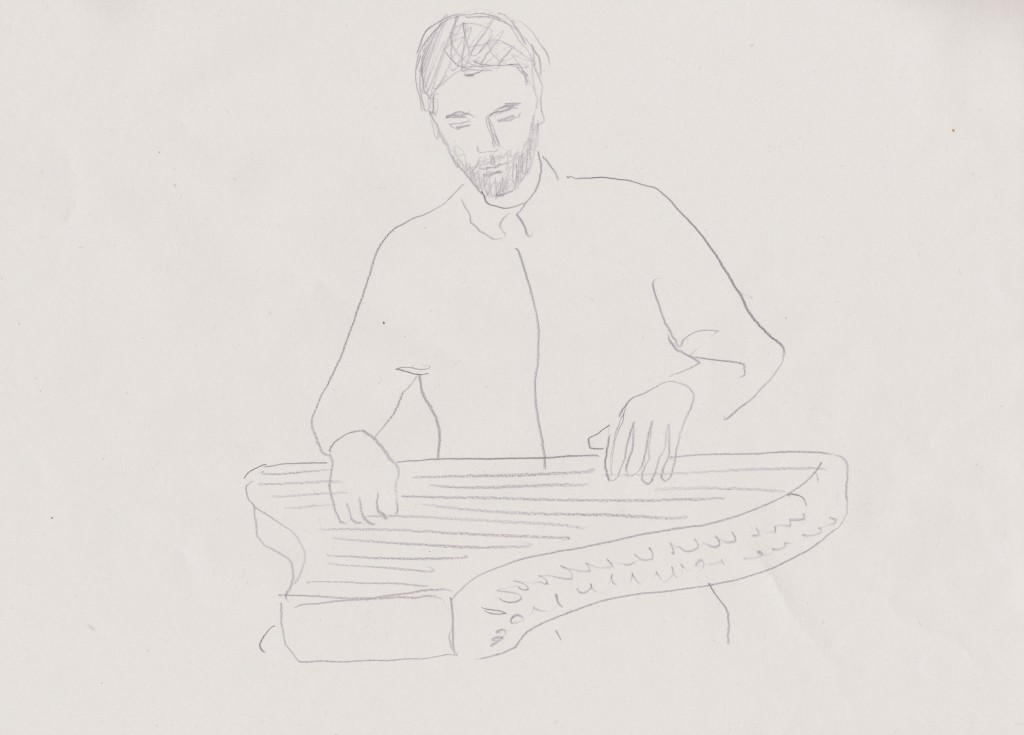 My drawing of Bill Cooley

Bill was born in New York City and studied at the Hartt School of Music as well as studying musicology at New York University. As a postgraduate in New York, Bill came by chance upon the recordings of several music groups in Spain and in one of the cd booklets, he found a photograph of a medieval psaltery made by the Spanish luthier Carlos Paniagua that led him to investigate the use and interpretation of this unique instrument. Eventually this chance discovery led him to up sticks and move to Spain where he’s been living since 2002. Bill is currently one of a handful of musicians to play the medieval psaltery professionally, he also plays the Turkish oud, Medieval lute and percussion.

I’m very happy that Bill accepted the invitation to play on the album, his playing on this extraordinary instrument is exquisite.

On the last day of recording I asked Bill if I could film and record him playing for the blog, here’s what he did, I’ve no doubt you’ll enjoy it as much I do!